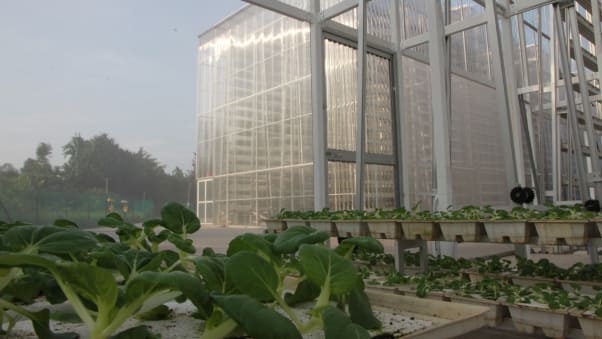 A new technology using AI is saving 50% of energy in Hydroponics Vertical Farms.

Since the global warming desertification has gaining momentum and temperature are on the rise in never seen before places; form the coldest places in Europe to the Deserts in the Gulf regions. This new development will worsen the existence, of an already scarce, food situation due to the population growth where many countries are reaching their saturation of farming lands. In the UK, for example, 72% of its agriculture lands are farmed and still they import 50% of its needed food consumption. A recent study suggests that, after few decades, by 2050, an estimated 70% increase, in food production, is needed in the developed countries and 100% in developing countries to meet the population growth. To conserve our natural ecological landscape from being transformed into farming lands to sustain the population growth, new farming techniques are needed to avoid this scenario. Vertical Hydroponics farming is one of these newly developed technical solutions.

Vertical Hydroponics Farming have been in the rise as a sustainable alternative to traditional agriculture. Many projects around the world have been exploiting this technology. From rooftops like the Lufa Farms in Montreal, a pioneer in this field with 138,000 square feet total farming area, that drew attention of the Prime Minister Justin Trudeau who visited the place and picked up himself a green bag before leaving. To the many Farming shipping containers from Freight Farm, Crop Box and TerraFarm in the US and Canada.

The advantages of the Hydroponics against traditional farming is concentrated around; no soil, no weeds, no herbicides, few pests, precise control nutrients, farming will be done in all extreme weather conditions cold and hot. In addition, there are two key advantages and only one disadvantage.

The two key advantages are, the first is water efficiency through recycling that will lead to only 10% loss and a 90% saving over traditional soil agriculture. The second is relevant to the proximity of the Vertical Farms to the homes of the potential buyers where will cut on transportation therefore cutting on fossil fuels the major source for CO2 emission.

But the only disadvantage is the power consumption from the use of LED lighting inside these indoor farms to substitute for the sun rays needed for a healthy produce. This high energy consumption not required in the traditional farming methods. For example, in a real-life situation when lettuces planted in greenhouses versus the vertical farms, the energy needed is 3,500kWh per year for Vertical Farms versus 250 KWh for the Greenhouses. This constitute 98% of lost energy.

Now a Scotland based company found a solution for the power consumption. They just claimed that they have an advanced technique using Artificial Intelligence with an internally developed technologies for communication and power efficiency. Thus, they were able to reduce electricity consumption by 50% and the labor costs by 80% in comparison to any existing hydroponics growing indoor farms. They also claimed that they can double the yields of any existing competitive indoor farms.

There is no doubt that Urban Farming is the future of farming where medium size vertical farms are distributed over the city will deliver 90% of the needed vegetables to all homes for only few minutes. If the energy problems are solved our cities will have bright sustainable future.