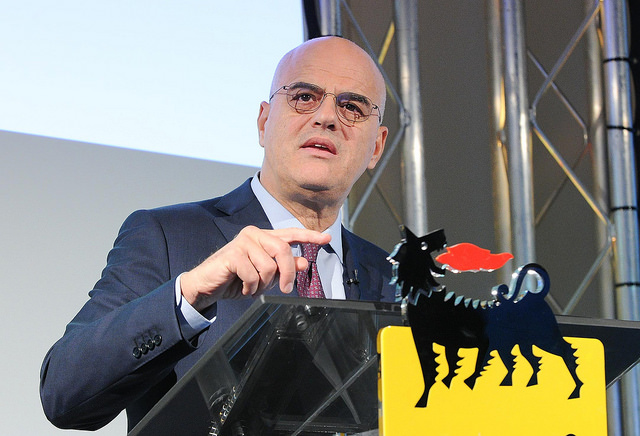 Italian oil and gas company Eni saw its profit drop by 66% in the second quarter 2019 when compared to the same period last year.

Claudio Descalzi, Eni CEO; Source: Flickr/Eni
Eni reported on Friday that its adjusted operating profit for 2Q 2019 was €2.28 billion, down by 11% q-o-q and adjusted operating profit of €2.56 billion. Excluding the impact of the loss of control over Eni Norge on the 2018 results to allow a-like-for-like comparison, the group adjusted operating profit increased by 9% in the quarter.
Eni’s net profit for 2Q 2019 was €424 million ($472M), down 66% from the company’s profit of €1.25 billion ($1.4B) in 2Q 2018.
In the second quarter of 2019, Eni’s oil and natural gas production averaged 1,825 kboe/d, down by 2% from the second quarter 2018.
Production was affected by the termination of the Intisar production contract in Libya from the third quarter of 2018.
Excluding that event, production performance was robust, leveraging on the ramp-up of the Zohr field and of projects started in 2018, mainly in Libya, Angola and Ghana (with an overall contribution of 218 kboe/d), as well as on growth in Nigeria, Australia and the United Arab Emirates.
These positives were partly offset by planned shutdowns in Kazakhstan and Norway, lower production in Venezuela due to the current situation in the Country and in Indonesia, due to unsteady production volumes reflecting a slowdown in end-markets in Asia, as well as mature fields decline, mainly in Italy.
When it comes to its hydrocarbon production outlook, Eni reaffirmed the target of a production growth rate in the range of 2%-2.5% y-o-y, assuming a Brent price forecast of 62 $/bbl and net of portfolio transactions.
According to the company, the growth will be fueled by continuing production ramp-up at fields started in 2018, particularly the Libyan projects Wafa compression and Bahr Essalam phase 2, by organic growth in Egypt (Zohr ramp-up), Ghana and Angola, as well as the start-up of the Area 1 oil project offshore Mexico, North Berkine in Algeria and the Trestakk project in Norway and the planned start-ups in Egypt and Algeria.
New field start-ups and ramp-ups are projected to add approximately 250 kboe/d. following the bulk of plant maintenance executed in the second quarter, production growth will resume at a faster rate in the third quarter still affected by residual maintenance activity and will further accelerate in the fourth quarter.
Eni revised its capex guidance for 2019 to a slight decrease from the previous guidance of €8 billion at the budget exchange rate of 1€=1.15 USD.

Join The Online Publishers “TOP” platform to benefit from an entire world of digital marketing and publishing.

Get Started With Earning For Posting On Social Media. To more click >>> Theinternationalcampaigner

3 Benefits To Going With TOP for Press Release Distribution.

3 Reasons To Check Out the TOP Photo Gallery.

3 Steps to Joining With TOP To Get Great Online Reviews.

2 Main Reasons To Opt With TOP For Online Reputation Repair.

Why All Advertisers Should Consider TOP Platform.

Any amount of running linked to significantly lower risk of early death.