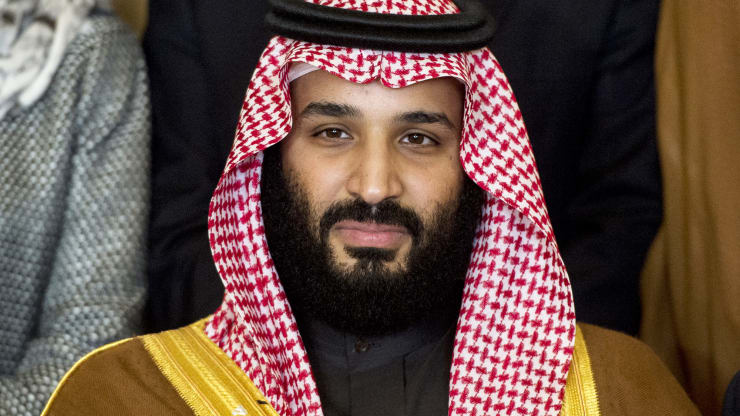 Saudi Arabia’s Crown Prince Mohammed bin Salman has warned of astronomical oil prices in the event that tensions escalate in the Persian Gulf, two weeks after his country was hit by a drone and cruise missile attack that Riyadh and Washington have blamed on Iran.

“If the world does not take a strong and firm action to deter Iran, we will see further escalations that will threaten world interests,” the crown prince said in an interview with CBS’ 60 Minutes over the weekend.

“Oil supplies will be disrupted and oil prices will jump to unimaginably high numbers that we haven’t seen in our lifetimes.”

The pre-dawn attacks on September 14 hit two of state oil giant Saudi Aramco’s largest oil facilities, forcing the country to temporarily shut down roughly 50% of its output, or 5% of the global oil supply. The following Monday, international benchmark Brent crude rose as much as 19.5% to $71.95 per barrel at the open ⁠— the biggest jump on record ⁠— before paring gains.

The Middle East “represents about 30% of the world’s energy supplies, about 20% of global trade passages, about 4% of the world GDP,” the crown prince, who is next in line for the Saudi throne and considered the kingdom’s de-facto ruler, told CBS.

“Imagine all of these three things stop. This means a total collapse of the global economy, and not just Saudi Arabia or the Middle East countries.”

Energy industry experts have cited figures between $100 and $150 per barrel of oil if the adversaries — OPEC’s highest and third-highest oil producers, respectively — went to war.

Aramco quickly promised it would bring its oil output back to normal by the end of September, and has already brought roughly 50% of that back online, company executives said. Two weeks later, Brent was trading at $61.48 Monday morning London time.

Yemen’s Houthi rebels, at war with the Saudis since the kingdom launched a bloody offensive on its southern neighbor in 2015, claimed responsibility for the attack. But officials in the U.S., U.K. and Saudi Arabia say the rebels would not have been capable of launching an attack of such scale and precision and assert the Iranians were behind it, something Tehran has vehemently denied.

Washington and Riyadh also blame Iran for a series of mysterious sabotage attacks on several foreign oil tankers in the Gulf near the vital Strait of Hormuz, the narrow conduit through which 30% of the world’s seaborne oil passes. Iran denies those allegations as well.

The attacks began taking place shortly after the Donald Trump administration ended waivers for countries importing Iranian oil, amplifying the effect of crippling sanctions it’s imposed on Iran since late 2018 after the U.S. withdrew from the Iranian nuclear deal. Animosity between Washington and Tehran has skyrocketed since then.

How likely is war?

In an earlier interview with CNBC, Saudi minister of state for foreign affairs Adel al Jubeir described the Aramco attacks as an attack not just on Saudi Arabia but on the entire international economy. Iran has called for an independent investigation into the events and presented a blueprint for a Gulf security initiative that excludes the U.S.

Iranian Foreign Minister Javad Zarif said in an interview with CNN last week that he hoped to avoid conflict, but that Iran was prepared for “all-out war” in the event of an attack by Saudi or U.S. forces.

Security experts and members of the diplomatic community have told CNBC that Saudi Arabia is ill-equipped for a war with Iran, as the latter employs asymmetrical tools like drones, cyber attacks and regional proxies while Saudi defenses are more suited to conventional warfare.

Many also believe that Riyadh is unlikely to escalate a conflict with Iran unless it has the U.S. backing, something that so far is not certain given President Donald Trump’s stated aversion to new Middle East wars and his 2020 presidential re-election bid.

But the risk remains that with no visible diplomatic off-ramp and an increasing volume of military hardware in the Gulf, a miscalculation or miscommunication could plunge the region into a full-blown war.

Iran’s President Hassan Rouhani warned world leaders on Wednesday at the UN General Assembly that “the Gulf region is on the edge of collapse, as a single blunder can fuel a big fire.”

How Does Online Banner Advertising Work?. To know more >> Theinternationalcampaigner.com

EVERYTHING BUSINESSES NEED TO KNOW ABOUT FOREIGN DIRECT INVESTMENTS.

Sell Photos In One Photos Gallery Through TOP.

An Opportunity With TOP Ebooks Library To Start Earning

4 Benefits For Online Advertisers Who Join With TOP

3 Steps To Getting Great Online Reviews.