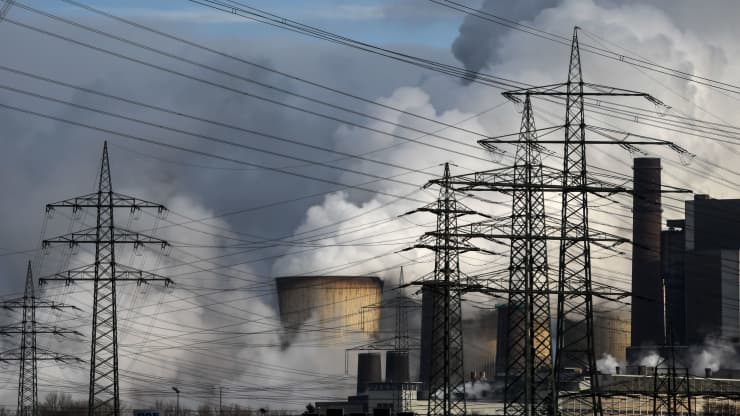 The cost of polluting in Europe is experiencing a meteoric rise unlike any period since its inception in 2005, driven higher by the region’s ambitious climate policy and increased financial investment in the market.

The European Union is home to the world’s largest carbon trading program. Carbon dioxide emissions are capped for many businesses and surplus allowances can be bought and sold.

The EU’s benchmark carbon price closed at 56.34 euros ($68.53) per metric ton on Monday, near its highest level since the launch of the market. The December 2021 carbon contract surpassed 50 euros for the first time ever earlier this month, having stood at around 20 euros before the coronavirus pandemic.

Analysts and traders believe this record-breaking rally still has plenty of room to run.

A cornerstone of the bloc’s climate and energy policy, the Emissions Trading System is the EU’s main tool for reducing greenhouse gas emissions that cause climate change. The ETS is designed to put a cost on carbon dioxide for the region’s most highly polluting industries, from aviation to mining. It currently covers around 40% of the EU’s greenhouse gas emissions.

Europe’s trading scheme is expected to play a key role in the bloc’s efforts to reduce carbon emissions by 55% (when compared to 1990 levels) through to 2030 and reaching net-zero emissions by 2050. The target has been criticized by environmental campaigners for falling short on what is necessary to prevent a catastrophic climate breakdown.

An annual Carbon Market Survey by Refinitiv, published on May 11, found that the cost of polluting in Europe is increasingly influencing investment decisions. Its survey of 303 respondents — mostly traders or regulated emitters in the global carbon market — also found that the majority believe EU carbon prices will continue to rise in the coming months.

Prices for 2021 were expected to average around 40 euros, before rising to 80 euros by the end of the decade. Analysts at Refinitiv said they see EU carbon prices trading at 89 euros by 2030, although some forecasters predict a level “far beyond that.”

Carbon prices need to be ‘much higher’

Of the sectors set to benefit from this trend, Steele said that utilities could a big winner of rising carbon prices. He tipped the airline, chemicals, steel and mining industries as being among those most at risk in the coming months.

A view of open freight wagons full of coal under smog during a day that the level of PM2.5 dust concentration amounted to 198 ug/m3 on February 22, 2021 in Czechowice Dziedzice, Poland. The central eastern European country has the EU’s worst air, according to a report published by the European Environment Agency (EEA).
Omar Marques | Getty Images News | Getty Images

Some at-risk industries have claimed that escalating carbon prices could ultimately damage their efforts to invest in new technologies, thereby delaying a much-needed industry shift away from fossil fuels.

But Berenberg’s Steele doesn’t agree: “I’d say that industry by-and-large for the last 16 years since the carbon scheme had been up and running in 2005 have really done pretty much nothing in terms of carbon emission reductions.”

Steele said there had been just one exception in that time. Only the power sector “has actually done anything of late” and that’s because higher carbon prices have helped fast-track a switch from coal to gas-fired electricity — “and coal produces twice as much carbon as gas, so it has saved half of the emissions if you like.”

“You actually need the carbon price to be higher now, much higher than where it is — and the EU politicians know this — for that to trigger that behavioral change,” he continued. “Don’t forget, companies can mitigate. They can put some of these prices through to customers. We demand elasticity but they can do so. So, it is not the shock and horror one might think.”

Analysts said that carbon prices would need to be at least twice as high as current levels to enable renewable technologies, such as so-called “green” hydrogen, to compete with polluting alternatives.

Meanwhile, EU climate chief Frans Timmermans said earlier this month that carbon prices would need to be significantly higher for the bloc to achieve its emissions goals. He also urged policymakers not to intervene in the carbon market, warning this would undermine the credibility of the scheme.

One issue currently afflicting the scheme is so-called “carbon leakage,” where businesses transfer production (and emissions) elsewhere due to the relative cost of polluting in Europe.

The EU is expected to propose reforms to resolve this in the coming months, potentially implementing what’s known as the carbon border adjustment mechanism from 2023. The policy is an attempt to level the playing field on carbon emissions by applying domestic carbon pricing to imports.

The European Commission, the executive arm of the EU, believes that this adjustment could bring in additional revenue ranging from 5 billion euros to as much as 14 billion euros.

Analysts at Morgan Stanley said the introduction of some form of border adjustment could benefit several companies in the long term but warned it could also lead to heightened tensions between EU member states and their trading partners.

This is because while all countries are under immense pressure to step up their climate commitments, the proposed pace of EU policies may be too fast for some. Some member states, particularly those heavily reliant on exports, are firmly opposed to the idea of introducing the carbon border adjustment mechanism, citing opposition from third parties.

The U.S. government has said it is “exploring” a border adjustment tax. However, analysts at Morgan Stanley said they do not believe such legislation will be brought in by President Joe Biden’s administration in the near term.

The Wall Street bank also said that while the EU was likely to allow a grace period to appease those opposed to the potential introduction of the carbon border adjustment mechanism, this timeline could end up slipping to 2024, or potentially even 2025.

Register an offshore corporation in Vanuatu today and pay no taxes.  Experience freedom from regulations and zero tax requirements.  Ask us how at Trade Board Limited.  Website address is https://tradeboard.biz.