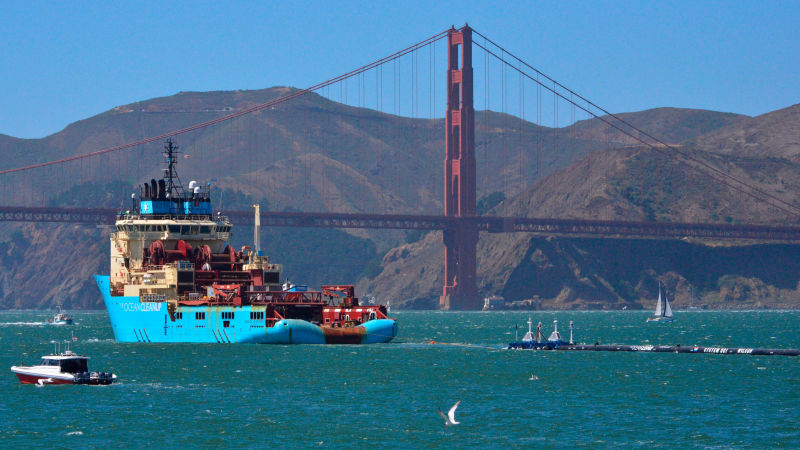 A gigantic floating boom out of San Francisco Bay will clean ‘The Great Pacific Garbage Patch’ Four times the size of California.

In a headline 6 months ago, form Fortune magazine titled:

That was not new because this Floating garbage has been named in 1980s when it was first discovered and was named ‘The Great Pacific Garbage Patch’ (GPGP). In this latest estimate its size grew to an overage of 8 times to 617,763 square miles, a size close to Alaska the biggest of the US States, 2.5 times the size of Texas and 4 times that of California where this garbage might end-up. These figures are being announced by Boyan Slat the founder of the non-profit organization Ocean Cleanup. The GPGP lies between Hawaii and California contains 79,000 tons of plastic.

This problem has been tackled by Boyan Slat a 24-year-old Dutch inventor, who dreamed of this project to clean all the plastic waste from the Oceans when he was 16 and started ‘Ocean Cleanup’ foundation at 18 and invented massive plastic-cleaning device that will remove 50% of the Great Pacific Garbage Patch in five years.

Ocean Cleanup has raised $35 million from donors and crowdfunding campaigns. The raised funds allowed them to test more than 270 models and six prototypes before creating System 001.

Now, 6 years later and at age 24 his device that was named is ready to launch from the San Francisco Bay and head toward the GPGP.

The devise, with a full deployment of 60 arrays of System 001, is 2,000 feet of floating booms propelled by wind and waves, will corral plastic into the center of its U-shaped form where an accompanied vessel will pick up the plastic garbage and ship it back for recycling. If this original pilot succeeds and more systems are deployed, ‘The Ocean Cleanup’ anticipates removing 50% of the GPGP in five years.

In a deceiving headline, to solve our solutions of GPGP:

The ocean vastness has prevented us from detecting many of these plastics waste islands until the 19080s. By putting more plastics, and here is the catch of the title, by using introducing millions of detectors and sensors, that mostly made of plastics, into our oceans and seas for a huge network of environmental detections

‘The Great Pacific Garbage Patch’ is only of fraction of what could be hidden in these vast oceans. The estimate that there is around 8 million metric tons of plastic garbage enter our oceans every year.

Technology is only part of the solution, but the best option is to stop this disaster at its source and stop dumping everything into the ocean.

Measures to be taken by the United States to Regulate Big Tech Companies. To know more zahlepost.com