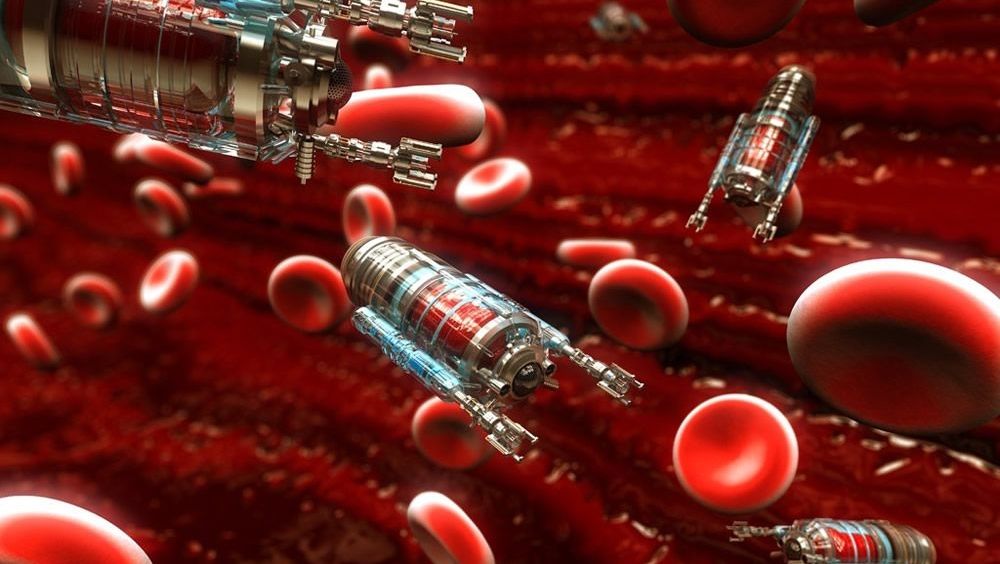 Nano-robots swarm behavior: will this nanotechnology improve the implementation in the Medical Field?

After the successful using of nanoparticle technology in the pharmaceutical industry, a new emerging scientific breakthrough based on Nano-technology in the medical science field is the Nano-robots. These are devices that is manufactured at a nanoscale with wide potential of applications.

Nanotechnology is a technology that has the capacity to measure, manipulate and manufacture at the scale nanometer. The final engineering molecular products are based on robotic devices, the Nano-robots.

Nano–robots has been applied to so many fields of medical science, in chemotherapy to combat cancer and deliver specific chemical reactions in the human body, monitor diabetes, send a swarm of nano-robots to break kidney stones.

A typical research of this technology was concentrating on creating a DNA nanorobot using biological elements, now the alternative is to create a nanorobot built of synthetic elements that roam through the bloodstream with the ability to selectively release specific treatment in the necessary harmed area. These same Nano-robots can contain and release a specific drug for tumors treatment.

Many advancements of this technology came from new manufacturing techniques, computation and sensing. The breakthrough came from the 3D technology that helped the simulation process to be conducted in Realtime and therefore guaranteeing reliability of the manufactured Nano-robots.

A new method to use this technology came from a discovery made at the Chinese University of Hong Kong (CUHK) an associate professor Zhang Li at the Department of Mechanical and Automation Engineering.

The discovery of Dr. Zhang Li led to a method that could help surgeons perform complex medical tasks. He has created an artificial micro-swarm that allowed the magnetic field to self-assemble millions of magnetic nanoparticles and control them by implement swarm behaviors inspired by nature.

These nano-robots with millions of magnetic nanoparticles, now using this methodology can alter their form to suit and interact with their environment. In their swarm formation they can shrink, extend, merge and split.

Dr. Zhang Li led further explains: “This method of the nano-robots to react in a swarm could be used by surgeons to send the nano-robots through hard-to-navigate spaces, the researchers say. They could also reportedly be used for targeted drug delivery, cancer therapies and eye surgeries.” He continued:” Nano-robots swarms can be programmed to help surgeons conduct complex tasks such as passing through tiny spaces in the human body.”

The exploitation potential of the swarming nano-robots is a breakthrough in nanotechnology not just in building these nano-robots that also the ability to control not individually by rather like a large group. Imagine this swarm of nano-robots send in formation like an army to break kidney stones. This will require a collaboration from a medical point of view that is why the Dr. Zhang Li and his team will further explore clinical application in the medical field. These tests will be conducted with the university’s medical school.

Even though the work is done in a nano-level, but the reward will be Mega-fold.

Whatever shape they take; Robots, Synth or Replicants will soon live among us. >>>prossit.com